skip to main | skip to sidebar

Back in February, the all talented Colombian super pop star Shakira came to the World Bank to promote a program that supports Early Childhood Development in Latin America; part of the Non-Profit Organization ALAS. 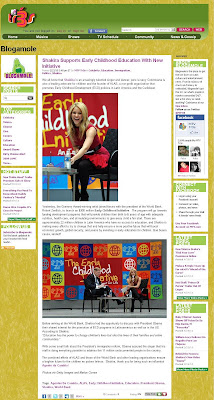 Shakira met with Robert Zoellick, president of the World Bank to launch a $300 million Early Childhood Initiative. The program will provide children up to 6 years of age with the right nutrition and education in their growth. Unfortunately Shakira did not sing a song that day, but she did provide oomph to the launch of this program that will help millions of kids in need.

I was able to cover the event and be published by The Washington Post, Blogamole; a MTV Tr3s blog, and a local catholic Hispanic newspaper; El Pregonero.

Los Suns and not The Suns 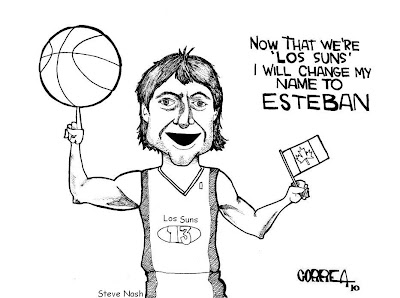 In support for the Hispanic Community, the Phoenix Suns have changed their jersey logo to 'Los Suns' They jersey change honors the Latino community, the diversity in the league, the state of Arizona and the Nation

I agree with the 'Los Suns' jersey idea, I think it's a smart thing to do in support for the Latino community. On the other hand, there are people complaining about the fact that the NBA arena should not be used as a political arena; and in a way I agree with them. I feel that if you go to a basketball game, or a hockey game, it should be a place where all kinds can congregate. Other than watching your favorite team, or enjoying your favorite sport, people go to sports games to relax, unwind, and forget about a day's work. My mixed emotions come from the fact that I am a Latino, I was born in Venezuela. I know what it is to work hard for a legal status, to pay your fees, and to want to live a better life. That's why I agree with 'Los Suns'

This is my blog that I share with you.

Feel free to pass this link around, share it with others. The cartoon may be funny, but the matter is serious. Whether you support the new Arizona law or not, it affects you.

what do you think about the NBA, or any other league using their arena to express their political views?

would this situation be different if the jersey's said something pro-the Arizona law?
Posted by Marlon at 2:39 PM 1 comment: 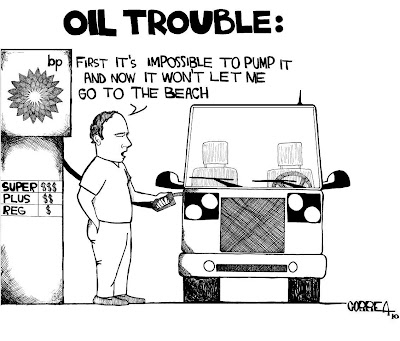 What more can I say? The oil rig's explosion is pumping too much oil in the ocean. It's killing animals, reefs, and it's making itself impossible to clean off. Apart from this HUGE oil spill, gas prices are going up, up, up! As dark a color it is, oil is leaving quite the stain on the US right now.

Let's hope BP does a better job at it.

Marlon
Posted by Marlon at 10:09 AM No comments:

Your new football is a twitter ball, and it does not go too far.

I thought about writing a long intro to this post, I actually had already written one but erased it by mistake. My previously erased post went on about how my future brother in law is a #1 all time, all weather Redskins fan. NO LOSS ever prevents him from being a fan, "through thick or thin" he always says. Family members and friends pressure him to jump ship (ALWAYS) But he's better than that, he knows not to go a sometimes better looking route, but wait it out with his Skins. When Oscar (my future bro-in-law) hears anyone in the media trash talk the Skins, he gets ANGRY!!!!!! Well, not angry, he's not scary or anything like that, but he does feel disapointed when he feels that the local media are the ones doing the most damage. He gets even more passionate when former players do the trash talking.

Well, I won't bore you no more. I've introduced my brother in law to you. (he's a nice guy, and a great quarterback) Now I will introduce Lavarr Arrington. (he needs no introduction)

Check out this twitter convo between my bro in law Oscar and Lavarr. 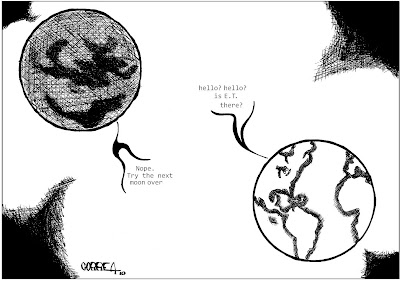 There are a couple of interesting things going on in outer space right now.
First, Astronomers find an Icy Asteroid orbiting the sun between Mars and Saturn. Scientists believe that this could answer the question as to where did the Earth get it's water from?
If you look at it from a religious point of view you already know the answer, but if you're a science geek, or if intergalactic mysteries attract you; then this article's for you!

The other interesting thing is that Nasa has been trying to phone E.T for a couple of years now.
"E.T. phone home, E.T. phone home" you remember the movie, we finally had contact with a real Alien. Could you imagine that??? The super almighty technologically advanced aliens coming to earth to greet us. Well, that's exactly what Nasa has been doing. Two years ago Nasa blasted the Beatles song 'Across the Universe' with hopes that they would answer or respond? Yeh it's ok I don't see that either. Now they have come up with 28 different missions to explore the cosmos and our solar system.

Since Twitter is so popular, have they considered sending tweets to outer space? is 140 enough to rech alien life form?

Well here's a link to the article from the Post. Enjoy and don't kill yourself trying to communicate with the galaxy.
Posted by Marlon at 12:14 PM No comments:

This is a good feeling 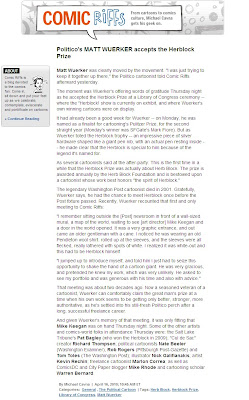 This year my fiance and I had the opportunity to attend the Herblock Award Prize Ceremony (No we did not crash it) This year's winner is Politico's Matt Wuerker; you can check out his work here

It was amazing to be able to see Herblock's original work face to face. I had seen some before but not quite like this.

It is an honor for me to be in the same page as these great artists.
Thank you Michael Cavna for including me.
Posted by Marlon at 9:16 AM No comments:

How would I look deep inside? 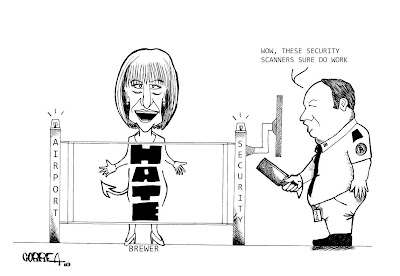 I have yet to go through a Airport Scanner, I don't know how confortable I would feel; I figure not much. What if these scanners would show more than what's supposed to? I mean as if nudity wasn't enough, what if they showed our inner self? Well, for Arizona governor Jan Brewer it might look like this. What if we scanned her inside heart? We may find HATE, RACISM, DISCRIMINATION, LOVE.......LOVE?? did I just say LOVE? She may be a caring person (to her own kind) she may lovable and affectionate (to her own kind) But let's get real, if you end up signing a law like the Arizona SB1070 all that "love" and "care" may be questioned.

So upon reading a bit of history on the 'Brewer' name, I come to see that their reason for leaving England was to escape chaos at the time. Chaos still haunts it's citizens all over the world. What's going on in Mexico and all the Cartels? What's going on in the Middle East and all it's dangers?
What about the earthquakes? what about hunger? All these are reasons for people to want to migrate to a better place. Isn't that the same thing that the Brewers do? They were immigrants when they arrived to England from Germany, and they were immigrants again when they arrived to the US. It's all a bit funny when you think about it, I'm sure Jan Brewer has never thought about her family past.
Join the Facebook group 1 MILLION Strong AGAINST the Arizona Immigration Law SB1070
Polititoon
Posted by Marlon at 10:17 AM 1 comment: